Management of Ectopic pregnancy entails some special situations, which are discussed below with illustrative examples.

Ectopic management can be managed expectantly in woman with an initial hCG level of <1000IU/l.

They should be haemodynamically stable, should not have abdominal pain ,

USG should not show peritoneal fluid greater than 100ml, and there should be no adnexal mass > 2cm.

This situation is usually not so common, as one does think of Ectopic pregnancy only when the patient has some sort of pain.

The first picture shows fluid in the cul-de-sac in ectopic pregnancy, while the second picture shows fluid in the cul de sac in normal ovulation;  Thus ,it is plain that fluid in cul-de-sac should not be an indication to press the panic button. This is because, fluid in cul-de-sac could be seen in normal ovulation and sometimes in pelivic infection. However, if the fluid is greater than 100ml, expectant management is not recommeneded. Expectant management requires measurement of hCG levels twice weekly for the first two weeks and thereafter weekly until it’s disappearance. there is a reported failure rate of only 4-6% with expectant management in such patients. this situation would, logically arise in infertility patients where early scans are performed more often.

Early pregnancy loss is quite often associated with abdominal cramps. Sometimes, other pelvic causes for pain may occur concomitantly, confusing the picture. This is why, in cases with no intra-uterine gestational sac and a positive pregnancy test, one should not jump to a conclusion of ectopic pregnancy and should desist from aggressive treatment with Methotrexate. The falling hCG levels seen in early pregnancy loss is in contrast with the slow rise of hCG titres found in live ectopic pregnancy.

Case history 1 A 40 year old lady with 4 children came with history of lower abdominal pain, bleeding PV, 2 weeks delayed periods and a positive pregnancy test. Intrauterine cavity failed to show a gestational sac on the initial ultrasonography and the patient had stones in the right ureter. The character of pains that she described was however not typical of stone. The doctor tested the serum for 2 values of hCG which showed 7500 and 3500 respectively, indicating that she had a pregnancy which was gradually, losing it’s viability, whether it be in the uterus or the tube. Severe tenderness on attempting TVS percluded a proper assessment of the endometrial cavity and she was referred to me. After reassurance, and medical management for urolithiasis, a repeat ultrasonography was done, this time with a high resolution 3D/4D machine. TVS now showed some products in the cavity. The products were evacuated. This underlines the need to do 2 hCG values as was correctly done in this case, before making a diagnosis of ectopic pregnancy.

Case history 2 A 30 year old G2 P2 with H/O 2 previous LSCS and tubal ligation, came with history of 10 days amenorrhoea and mild abdominal pain. Ultrasonography in a portable machine did not show a sac in the uterus or outside. An ectopic pregnancy was diagnosed. Ideally, even if there is a sac, if the size is less than 2cm, the patient could be a candidate for Methotrexate. This patient had lost her faith in ligation as a method of contraception and just wanted cure of ectopic pregnancy. I did not wait for 2 values of hCG. A baseline value of hCG was taken and inj.Methotrexate50mg given IM in the evening . The pictures below were taken next day morning and show how the ectopic was extruded out. USG taken 2 days later showed resolution of the fluid and the patient remained asymptomatic thereafter.  Thus, even if fluid is seen in the pouch of douglas after injection of methotrexate, if it is not of a large amount, one need not worry.

USG taken 2 days later showed resolution of the fluid and the patient remained asymptomatic thereafter.  Thus, even if fluid is seen in the pouch of douglas after injection of methotrexate, if it is not of a large amount, one need not worry. 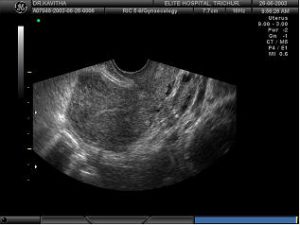 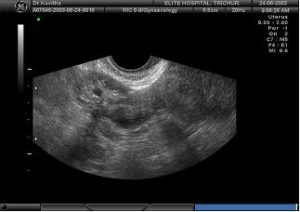 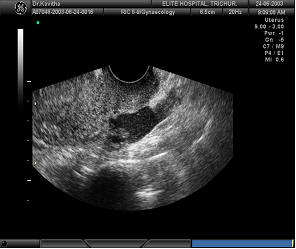 case 3:  A patient with missed periods with serum beta hcg showing 50 units came with acute abdominal pain. Ultrasonography showed lot of fluid ?blood in pelvis with a mass in left adnexa.Left ovary is enlarged and uterus is empty.Laparoscopy was done to rule out ruptured ectopic, though patient was haematologically and otherwise stable.