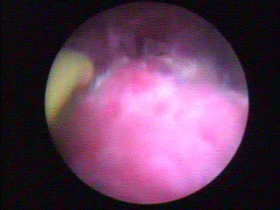 Hysteroscopic myomectomy is a procedure done for patients with fibroids that  protrude into the lumen of the uterus.

Fibroids that protrude into the uterus bleed heavily.  It is best to remove them hysteroscopically. This is called hysteroscopic myomectomy. Hysteroscope is an instrument shaped like the laparoscope. It is a tubular scope with a camera attached at one end. It is introduced into the uterus via the vagina. The fibroids protruding into the uterus like in the picture below are removed using cautery. 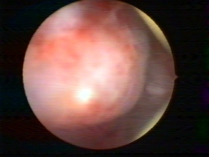 There are no incisions anywhere on the body and the patient can start working almost immediately. This procedure is reserved for only small fibroids protruding into the uterine cavity.

After effects: For large fibroids, sometimes, the period immediately after the procedure may be heavy. It will regulariseby itself and need not cause any worry.

Sometimes there may be watery discharge after the procedure.  This will settle gradually without much intervention.