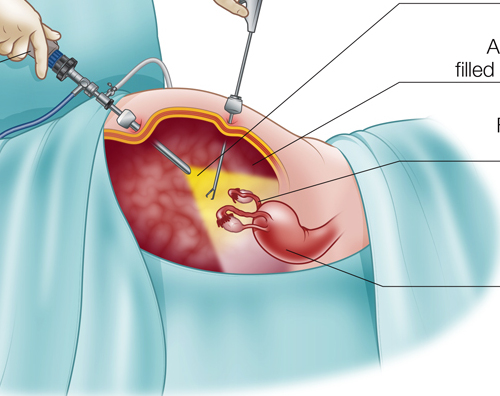 The uterus, ovary and the rest of the pelvic and abdominal organs can be visualized through the scope and viewed on a television monitor.  Instruments passed through two tiny 5mm holes lower down in the abdomen can rectify any defects in the visualized organs .  In laparoscopic hysterectomy, connections of the uterus to the body are cut with instruments using the laparoscope.  The uterus is then removed vaginally. 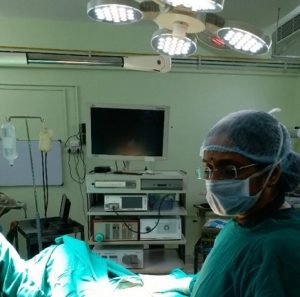 Advantages for the patient:  There being very few stitches on the abdomen, the procedure is fairly painless.  Laparoscopy gives an enlarged view of the internal organs to the doctor and minute corrections can be made in a better fashion.

How patients are admitted under Dr.Shobhana for laparoscopic hysterectomy.

The patient has to undergo many blood tests , X-ray chest,and ECG to make sure she is medically fit.

On the day prior to surgery, She has to take only oral fluids after 4PM. She will be given 2 litres of a special fluid , which will make her empty her bowel completely.  This is to ensure that the bowels do not come too much near the area of surgery near the uterus.

She should not take food or any fluids after 10PM the previous day.

She will be admitted in the morning of surgery and surgery will be done in the afternoon.

She will be given enough fluids intravenously in the morning so that she does not feel hungry or thirsty.

2 bottles of blood have to be arranged, one bottle ready at site.

For compartively small uterus, operative time can be expected to be one hour.  But in complicated cases like patients with previous surgery, severe adhesions, or large uterus, surgery can be prolonged.

After surgery, the patient will be shown to the relatives and wheeled back to the post operative care room where she will be observed for complications for about 2 hours.  After that she will be taken to the room.

Following surgery, women may feel nauseous as a side effect of the general anaesthetic and experience some abdominal pain and discomfort. These are relieved with medications.There may also be some vaginal bleeding which should reduce after a few days. Women are encouraged to get up and walk around on the first day following surgery to avoid constipation and gaseous bloating of abdomen and decrease the risk of blood clots and lung infections

She can start oral sips 6 hours after surgery.She can start food next day morning. Since the patient is well hydrated and enough glucose has gone into her system, she may not feel hungry or thirsty and bystanders should not force her to eat or drink, because they feel scared.

If she is very fit, she can be discharged next day. Usually, patients take 1 or 2 days to recuperate from surgery.  After taking food some patients may feel some bloating sensation in the abdomen due to gaseous distension in the evening.  This is usually relieved with medicines.  After the bowel starts working like before, the patient will pass flatus.  After this, she will begin to feel much better.

She can be discharged the 3rd day, usually if she feels fit and fine.  Some patients, requiring difficult surgery , with bowel adhesions, will take longer to recuperate.  This is because, the bowel takes longer to get back to normal.

How much rest is need after hysterectomy: She can start small tasks after she is discharged.  She can travel by bus, bend, climb stairs, lift objects from the kitchen platform to the cooking gas, and so on. She should avoid sudden moments like jumping or gardening for 1 month.  This is important, because lack of pain may lead to the patient forgetting that she is post operative and she may indulge in strenuous activities.  Dull aching pain and feeling tired can be expected, for a few days. This is because healing processes are taking place inside the body.  As long as these symptoms reduce day by day, it is okay. If it is increasing one has to visit the doctor.  Light blood stained discharge can be expected for 6 weeks after surgery.  This will settle.  This is due to healing of the vaginal wound.  Frank bleeding has to be reported and a visit to the doctor made.

Putting on weight after hysterectomy
Studies have shown that there is a slightly higher risk for weight gain in the first year after surgery, but this is more common in women who were already heavier at the time of surgery.It may not be entirely an after effect of surgery. Being housebound and decreasing the level of activities during recuperation can also lead to weight gain.   Proper diet and exercise can prevent this weight gain.  In women who have had their ovaries removed, androgenic hormones can start acting leading to weight gain. Bulging of the abdomen due to weak abdominal muscles can happen after open surgery, but is less likely after vaginal hysterectomy or laparoscopic hysterectomy.

Back pain after hysterectomy?
Positioning of the legs for hysterectomy or unfamiliar or hard hospital beds may cause temporary backpain, which can be cured.
If hysterectomy is done by opening the abdomen, women may  hunch over to protect their abdomen and if they do this for long enough do develop back pain because they have changed their centre of gravity.  It is therefore important to walk up-right as soon as you are able to.  This is unlikely after vaginal or laparoscopic hysterectomy.  It is common for women in their middle age to get lumbosacral strain . This may happen with or without hysterectomy.  However, if a woman has undergone hysterectomy, she may attribute it to hysterectomy.
Can I have sex after hysterectomy?
You will be advised not to have sex for around four to six weeks after having a hysterectomy. This should allow time for scars to heal and any vaginal discharge or bleeding to stop.   Having the uterus removed can cause women to worry about feeling less womanly, or losing their sexual attractiveness.  However, these feelings don’t last long.  Interest in sex may return as recovery progresses.

What are the complications of hysterectomy?
Serious but uncommon complications include:
Bleeding
Damage to nearby organs like bladder, urethra .
Pelvic infection.
Repeat surgery for bleeding or wound problems.
Clot formation in the leg veins.

The other frequent minor side effects include wound infection, urinary infection and abnormal sensations around the wound area.